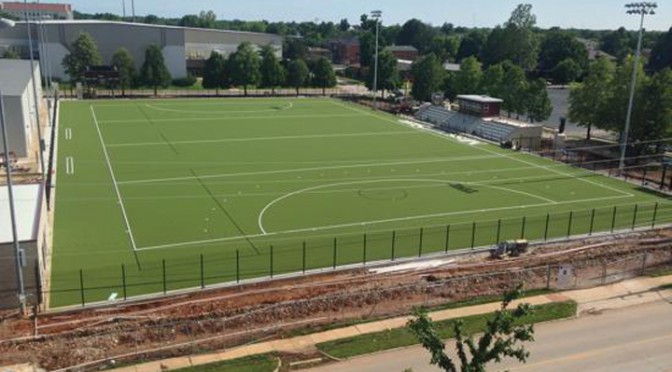 The Missouri State University water cannon system was designed to provide their new field hockey turf with adequate coverage for safer field conditions and quicker gameplay. The water cannon system is timed for a set duration that can be actuated with remote control activation. The six main sprinklers can launch water over half the distance of the field for complete field coverage. The field is equipped with six Underhill M-160 sprinklers in which two sprinklers are activated at a time on either side of the field.

There are several safety features included to prevent a bystander from being washed away in the several-hundred gallons-per-minute streams of water powered by the activated sprinklers.  An alarm triggers to clear the field prior to discharge of the M-160 sprinklers and smaller sprinklers as a warning to persuade anyone standing too close to the cannon to evacuate.

The design allows the Missouri State University field hockey team to treat their field before a game, during half-time, or prior to practice to ensure consistent playability.

Ross & Baruzzini (www.rossbar.com) specializes in providing engineering and architectural design and consulting for facilities and infrastructure in transportation, government, higher education, healthcare, utilities and facilities requiring 24/7 operations. The firm approaches each new project with a detailed understanding of business processes, facilities and technology requirements to ensure that personnel, equipment, communications and procedures are fully integrated for maximum efficiency and effectiveness. Founded in 1953, Ross & Baruzzini is continually ranked as one of the top engineering firms in the nation. The company has regional offices in Indianapolis, Miami, Philadelphia and New York, and Columbia, Illinois and corporate headquarters in St. Louis.