Air travel — an industry founded on and accustomed to revolution — is being revolutionized again, and it may be partially due to hipsters.

Do you know what it means to be a hipster? I didn’t until my colleagues in Los Angeles showed me the Urban Dictionary definition.

The digital revolution isn’t entirely a hipster phenomenon. Airport users live in an online, connected world. Not only is the airport industry recognizing the importance of the passenger experience, but it’s also discovering the significance of addressing the connected, tech-savvy traveler. At the same time, the aviation industry’s macroeconomic demand to be cost-conscious is leading to alternatives to conventional capital project development. However, these brick-and-mortar alternatives don’t always readily embrace digitization.

As airports struggle to cope with both trends at once, the conflict between low cost and high-tech is often tackled by segregation. Issues that relate to technology go to the IT group, while building problems are left to the engineering and construction group.

While it’s certainly easier to separate than adjust, it proves ineffective.

I don’t expect too much.

If the world ended today,

There are two ways airports can adjust their traditional processes to accommodate rapid change: bridging and adapting.

It’s Time to Bridge the Gap

If airport designers and engineers are going to adapt to the new industry landscape — one that revolves around an axis of technology — they’re going to have to bridge IT, security, and engineering. That can seem like a long bridge over a deep chasm, but there are already airports that are building it quite nicely. 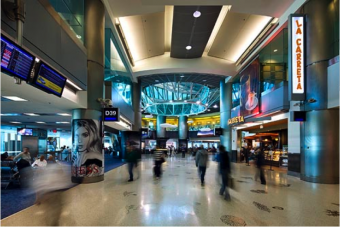 The upgrades included engineering elements, including a 72-lane passport control hall, a spacious baggage claim area, and an eight-lane security checkpoint for connecting passengers. On the tech end of the spectrum, there are an array of features, including 30 automated passport control kiosks and 12 global entry kiosks for expedited clearance.

In the end, the Miami-Dade Aviation Department, American Airlines, and their consulting and construction partners built a terminal that utilized technology and engineering to offer not only sparkling functionality today, but also the flexibility for technological growth.

There would have been no way to complete such an ambitious, complex project without a strong bridge between technology and construction.

Achieve the Ability to Adapt

Thriving airports adapt, and so must their engineers.

It takes a 360-degree perspective to close the gap between technology issues and engineering issues. An airport might be today’s cutting edge and tomorrow’s fish wrapper. After all, the value of a system diminishes during its lifetime, especially if it was constructed without accounting for future upgrades. On the other hand, if a system is designed with the flexibility for easy upgrades in mind, its lifetime value is bolstered.

Airports navigate between the shores of long- and short-term demands. Successful airports flourish with an ability to assess emerging technologies and deliver an enjoyable passenger experience. Airports that cannot — or will not — break free of the old model will continue their downward slouch toward becoming depressing bus stations.

This isn’t strictly a large airport problem. Small and medium-sized airports can (and should) be innovative as well. So what should all airports be prepared to embrace?

The appearance of next-generation, satellite-based air traffic control and navigation will streamline congestion problems both in the air and on the ground. At the same time, the associated digital aircraft will open new opportunities for airports to become more efficient in passenger and baggage transfer. Travelers will continue to move toward digital, and as a result, the importance of non-aeronautical revenues will increase. Airports will move deeper into the traveler’s online reality.

But who can predict the next big thing? People far more astute than me try and fail to predict the tech future all the time. As Dylan Tweney, senior editor of WIRED, once put it, “It’s incredibly difficult to predict which specific gadgets and applications will take off two years from now, let alone 10 years from now … Who could have foreseen the iPhone, or its huge impact on the cellphone industry, even one year before it came out?”

That uncertainty is precisely why airports and engineers need to embrace evolution, make room for change, and build flexible systems. Who knows what will emerge next?

2 thoughts on “Bridging the Gap: Adjust Traditional Processes for Success in the Aviation Marketplace”